The afternoon tea is often immediately identified as a core part of British culture. Although it’s now an expensive luxury day out with family or friends, it used to be extremely popular in the country, particularly within high society.

The trend caught on and, especially for those who were part of British high society, it soon became a ritual amongst the ladies. They would dress up for the occasion, which took place around 4pm daily, would chat and have their afternoon tea. The event originally started in the drawing room, hence many British period films and TV series show people having afternoon tea in the drawing room.

It was the high society event of class and wealth. Families would use their best fine-bone china to host the event and tea itself was an expensive delicacy at the time.

Afternoon tea has become more normalised since. Most restaurants, cafés and hotels will offer afternoon tea packages to their guests. The time of afternoon tea is also flexible, many simply replace lunch or dinner with the afternoon tea.

Although it started out as a small filler between lunch and dinner, a modern afternoon tea is now quite large. It has both sweet and savoury foods. Typically, you’ll receive a selection of sandwiches with small tarts or quiches, scones with jam and clotted cream then a selection of small delicate cakes. Of course, this is served with fresh tea from tea leaves and, occasionally, a glass of champagne.

If you’re ever in the UK and ready to take on a food challenge, definitely have a go at the afternoon tea. There are numerous places around the country that offer it, although the best tend to be the country houses further out the city. 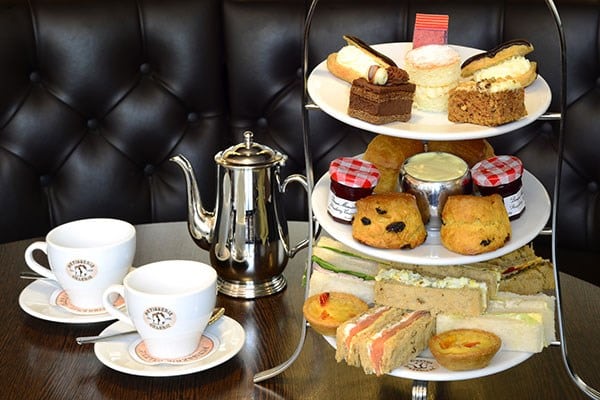